Skip to content
Date: April 11, 2017Author: Simon 1 Comment
WE’VE MOVED TO ‘THE FRAGMENTED FLANEUR‘ VERY MUCH LOOKING FORWARD TO SEEING YOU OVER THERE. STILL THE SAME GREAT CONTENT, JUST UNDER A NEW NAME. CHEERS! OK this could be a tricky one. In 2013 In Zaire brought out their debut album ‘White Sun Black Sun‘, a record which became an instant hit for me; and one that has never been far from my turntable since Berlin label Sound of Cobra brought out a repress the following year. ‘White Sun Black Sun’ is one of those few albums that has acquired a status of near invincibility as far as I’m concerned. Now, after four years, In Zaire have brought out a follow up to their debut, and here lies the problem…one of expectation. I want ‘Visions Of The Age To Come’ to be brilliant. I want it to be another ‘White Sun Black Sun’. But, and here’s the rub, I also want it to be different; because if it was just a shadow, however pale, of the debut that would also be pointless in my eye…especially after all this time. Not asking much am I? Well let’s get one thing out of the way immediately. This follow-up is absolutely nothing like the debut. If you were to play this album blind to me then I wouldn’t guess that it was In Zaire. I’m relieved about that, because there would have been a temptation for the band to stay with a winning formula. But is it any good? Well let me take you through it track by track and see where we get. 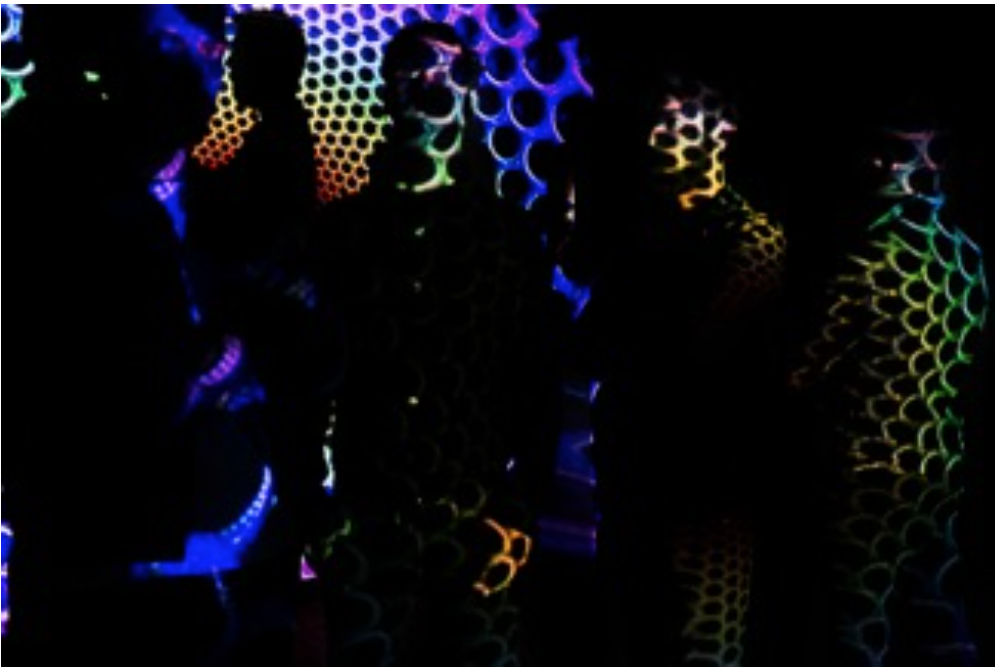 The album kicks off with ‘Hermes Dance’, tribal drums emerge out of the mist and the tension builds up as different synth sounds drift in and out of the mix. This is the overture, the announcement of something different. The smoothness of the previous album is here only hinted at towards the end of the track. This is something far more angular and broken up. A more veiled sound that you can only work through with repeated listens. Now we are settled in ‘Revelations’ begins in a much more pacy way. Elements of something dark and gothic mix in with electronica and a baseline that comes straight from Joy Division era Peter Hook. But then just as you think the band might be heading down the shoegaze route the track breaks out several ways at once with some prog-style keyboards, really heavy  guitar and vocals that shine and soar. This is a track that really rocks out. There’s so much going on here that it’s going to take many listens to decipher it all…I can live with that. ‘Headscape’ is different again. Electronic beats and drones start the track off in a way that really get inside your head and begin to pulse away and then…it’s off. This is the funkiness that I know In Zaire are happy to include in their music, and here they do it in a thrilling way. Again it’s the mixture of styles that really draws the breath. I really like the way they bring everything together in a kind of dark grooviness, or is it groovy darkness? This is what dancing in a cave at the world’s end might be like. Thrilling! After that ‘Synchronicity’ jolts you out of your apocalyptic reverie and starts in a more experimental vein. There’s some blips and dot underneath swirling and pulsating oscillations before settling into a weird blues rhythm. Then the guitar breaks in and it’s sublime and sparse. I must admit that this track didn’t hit me the first few times I heard it…but now it’s really grabbing me in the face now I’m managing a closer listen. As you may expect from the title ‘Planets Converge’ is the only track that is really recognisable as the In Zaire of ‘White Sun Black Sun’, and owes much of it’s sound to that era. Although only a relatively short number, at this stage of listening to the album I cannot decide whether this is a good or bad thing. What is does do is simultaneously remind me how good that first album was and separates it from pretty must the rest of this one. With ‘Nibiru’ we are back with the much more rockier In Zaire. A wailing guitar on top of a relatively speedy rhythm section gives the track a sense of immediacy, something which increases and it becomes more obvious that this is a space-rock track that has us whizzing past stars and nebulae. This is not the dark introverted solar system of the previous album but a much more open journey…we’ve broken away from the Sun’s gravity and are free to explore the galaxy. ‘The Severn Sermons Of The Dead’ has an ominous title to it. Probably the most ‘prog’ track on the album it immediately feels as if it has been arranged on an epic scale before dropping into a real groove. That funkiness is back as the band really loosen up and wig out in a really satisfying way. Not the dark foreboding that the title would have you believe but a really joyous track that will have you moving around involuntarily (well nodding your head at least). Which brings us to the final, title, track. If ‘Hermes Dance’ was the overture then ‘Visions Of The Age To Come’ is very much the epilogue. A slower number that feels like it’s filled with mournfulness and regret. Darker than much of the album it eventually disintegrates into and album-ending heap which ultimately asked more questions than it answers, and that’s just fine because, really, knowing the answer is no fun at all. ‘Visions Of The Age To Come’ is an album that you have to find your own way through. The band provide the signposts and key points for you, but you really need to put the pieces together yourself to make sense of it. From this perspective it shares the same aspect of mystery that the first album does, yet it is a different sort of puzzle altogether. There is more complexity here, achieved through the blending of different genre within and between tracks. As such I would be loathed to categorise this album, just enjoy the adventure of listening to it. In the end I’m both pleased and relieved that ‘Visions Of The Age To Come’ is not a disappointment, and that In Zaire have put together an album that is dark in a way that avoids many of the cliches that a number of other ‘dark’ bands are currently falling into. It is also complex and layered and will undoubtedly reveal more with every play.

One thought on “Album Review: Visions Of The Age To Come by In Zaire”